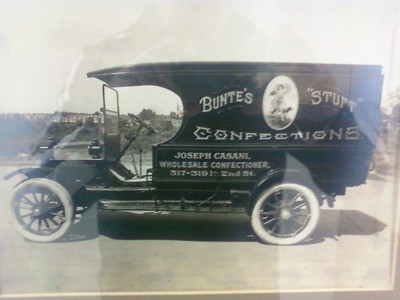 When Milton Hershey decided to make a chocolate bar in 1903, he asked Casani Candy Co. to handle its distribution throughout Philadelphia.  Casani became the Hershey bars first customer... When Henry Heide invented Juicy Fruits in 1869, he counted on Casani as well.  Casani Candy Co. was founded by Henry Jonas in 1865.  In 1882,  Jonas hired  Joseph Casani as a bookkeeper. And by 1908, the two became partners.  Jonas died in 1913-- leaving Casani in possession of the business.  The firm has always been aggressive, and was the first company to replace the horse and wagon with a fleet of trucks.  In 1947 John Lees joined the company as an office boy and go-fer.  Casani taught Lees the business, and told him in the late 1960's that he was going to take over, and in 1973, he did just that.  Casani suffered a stroke in 1978, and died five years later at age 82.  John (Jack) Lees has always been involved in the candy industry activities as well as running the company. He has been Chairman of the annual Philadelphia Candy Show.  His colleagues have awarded him the Hook Award as well as the Copper Kettle Award.  He is a trove of candy industry lore.